Figure 1. Nuclear import and export. Left: Cargo to be imported binds to cytoplasmic importin and enters the nucleus, where it is released from importin by Ran-GTP. The Ran-GTP/importin complex moves to the cytoplasm and binds RanBP. Ran-GAP activates the GTPase activity of Ran to convert Ran-GTP to Ran-GDP and release importin. Ran-GDP enters the nucleus and is recharged by a Ran-GEF. Right: Cargo to be exported binds to exportin and Ran-GTP in the nucleus. The complex moves to the cytoplasm where Ran-GTP is converted to Ran-GDP, leading to the disassembly of the complex. Both Ran-GDP and exportin then enter the nucleus for another round of nuclear export. 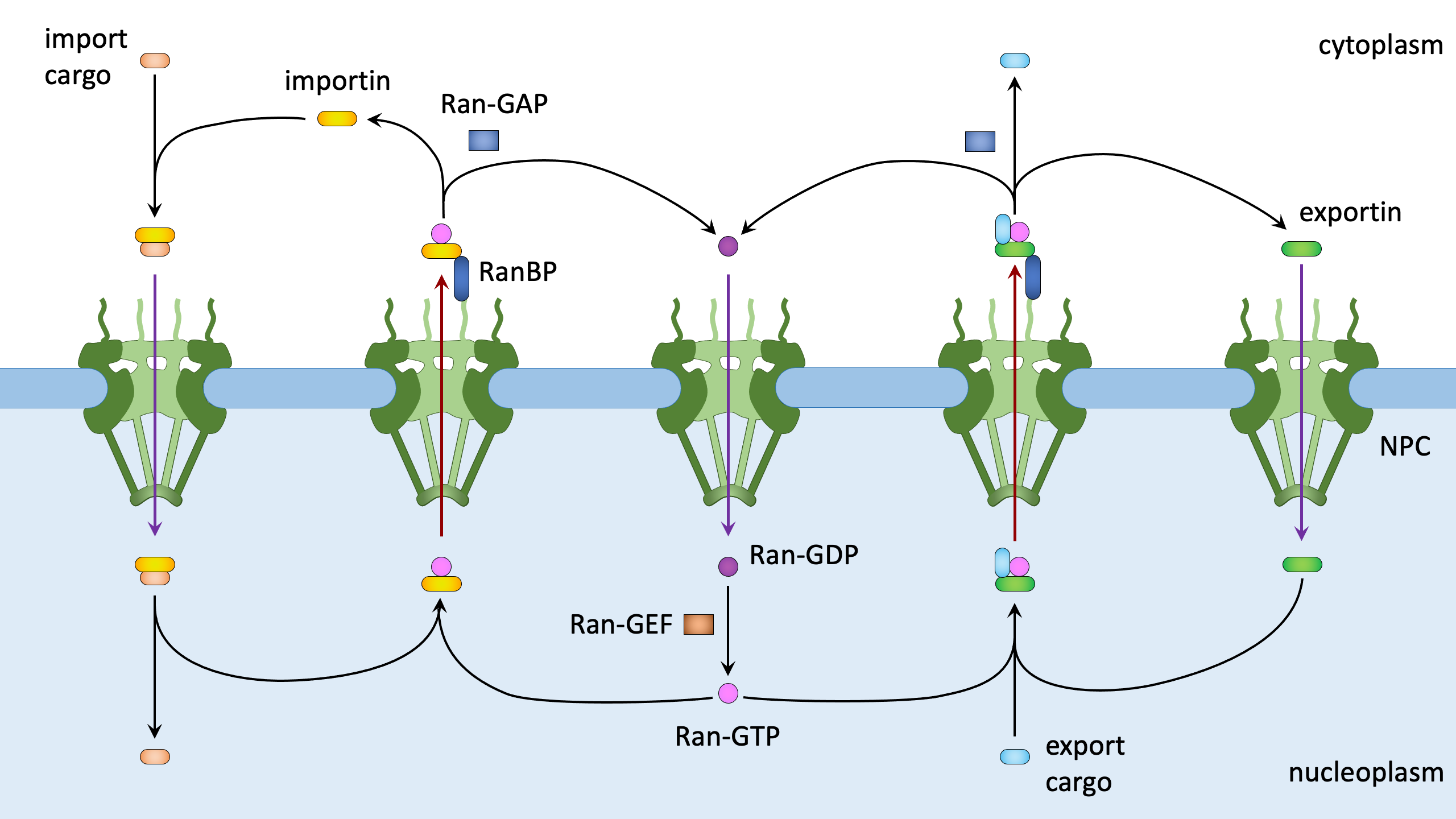 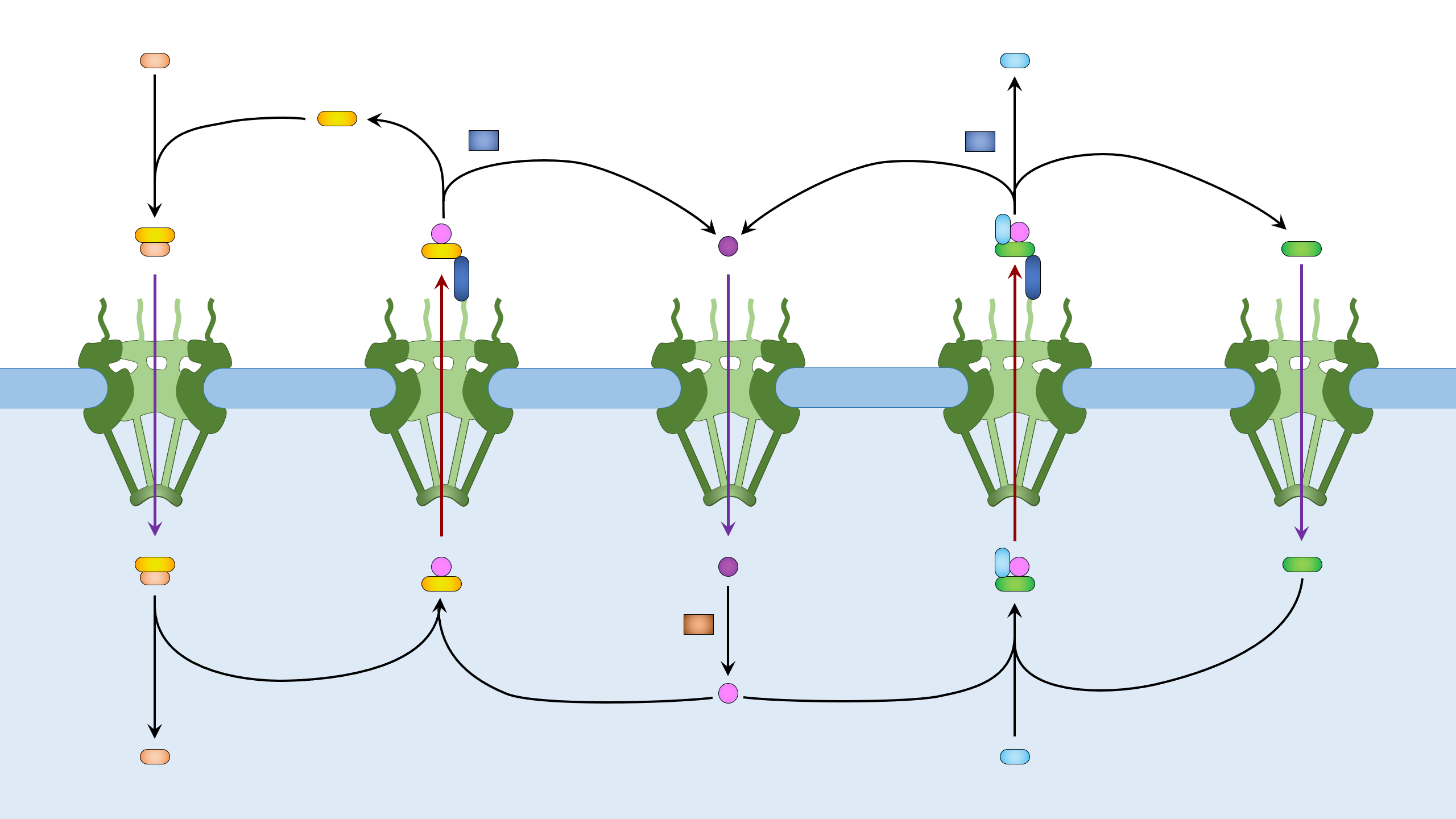 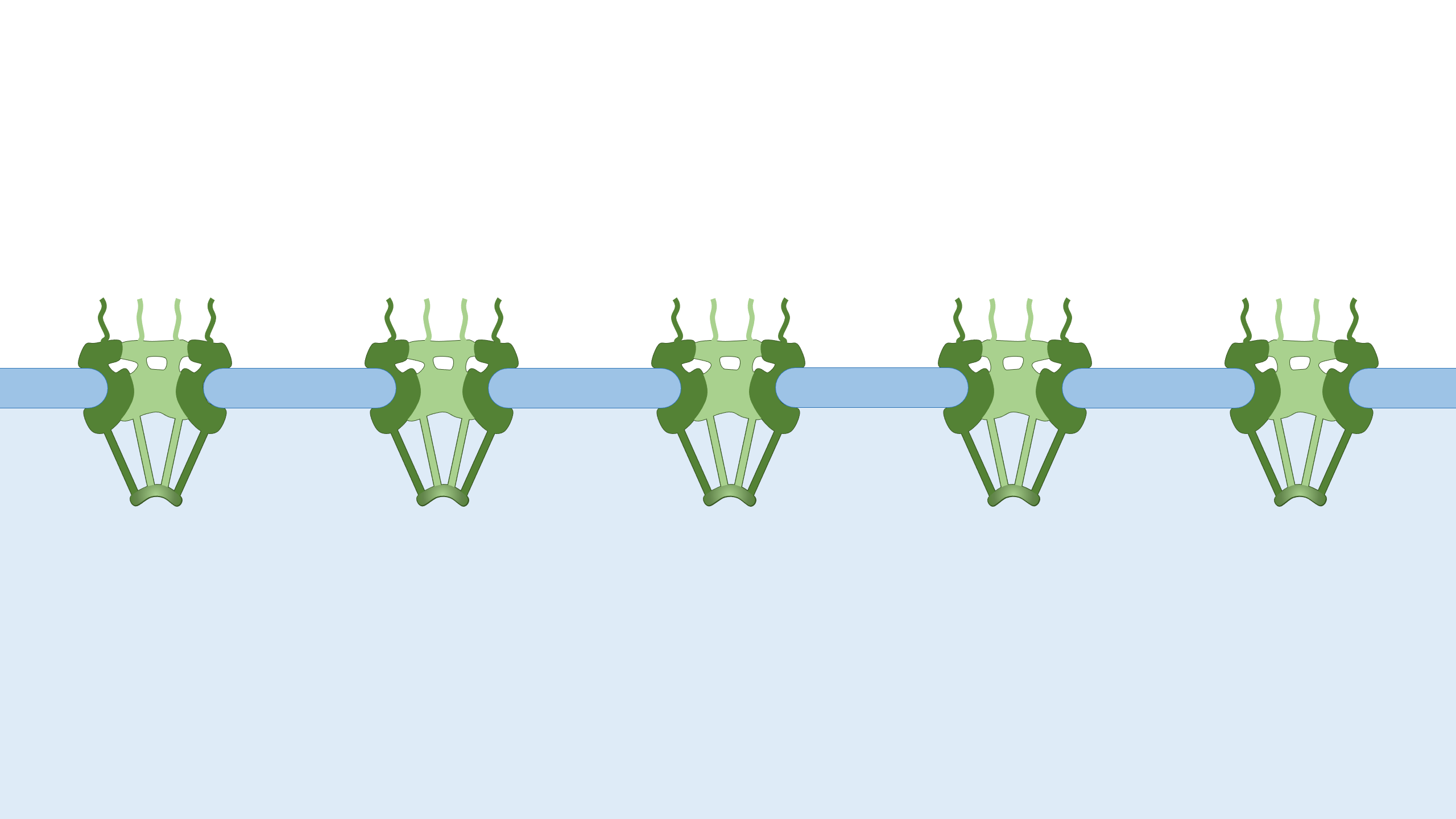 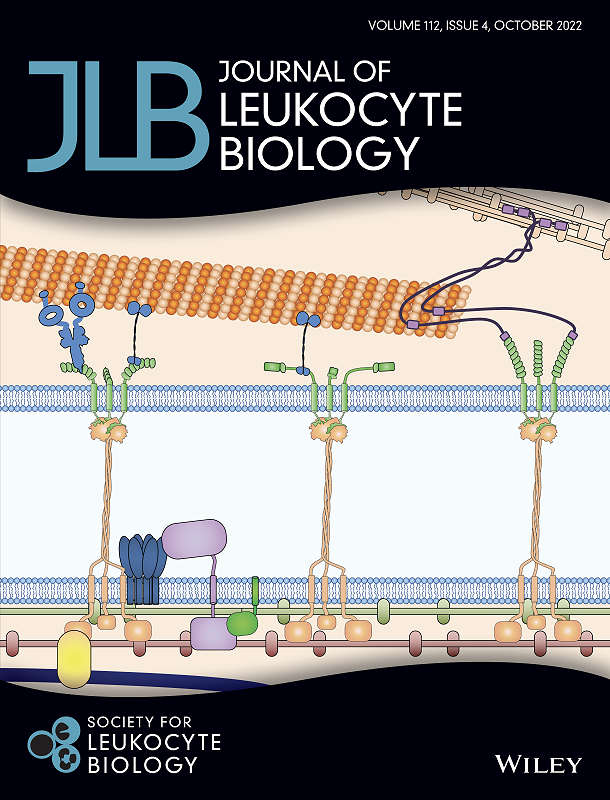 Figure 2. The LINC complexes connect the cytoskeleton to the nuclear lamina and chromatin in somatic cells. The LINC complexes are composed of nesprins on the ONM and SUN proteins on the INM. The cytoplasmic domains of nesprins interact with the cytoskeleton. The giant isoforms of nesprin-1 and -2 contain actin binding domains and interact with actin filaments. Such an interaction is regulated by emerin through its interaction with myosin II and is strengthened by fascin and formin proteins FHOD1 and FHOD3. Nesprin-1α interacts with AKAP6 and AKAP9 to facilitate microtubule nucleation. Both the long and short isoforms of nesprin-1 and −2 contain a kinesin-1- and dynein-binding region and associate with microtubules through the motors. Nesprin-4, which may not be expressed in leukocytes, can also bind to kinesin-1. Nesprin-3 binds to plectin (and the related BPAG1 and MCAF), which can interact with both microtubules and intermediate filaments. In the perinuclear space, trimeric SUN proteins bind to nesprins and torsin A. In the nucleoplasm, SUN proteins bind to lamins for anchorage and interact with Samp1 and emerin. Many of these proteins, like lamin A, lamins B (through LBR), SUN proteins (through an unknown adaptor), and LEM domain proteins (Man1, LAP2, emerin, and LEMD2, through BAF and HDAC3) directly or indirectly bind to chromatin. 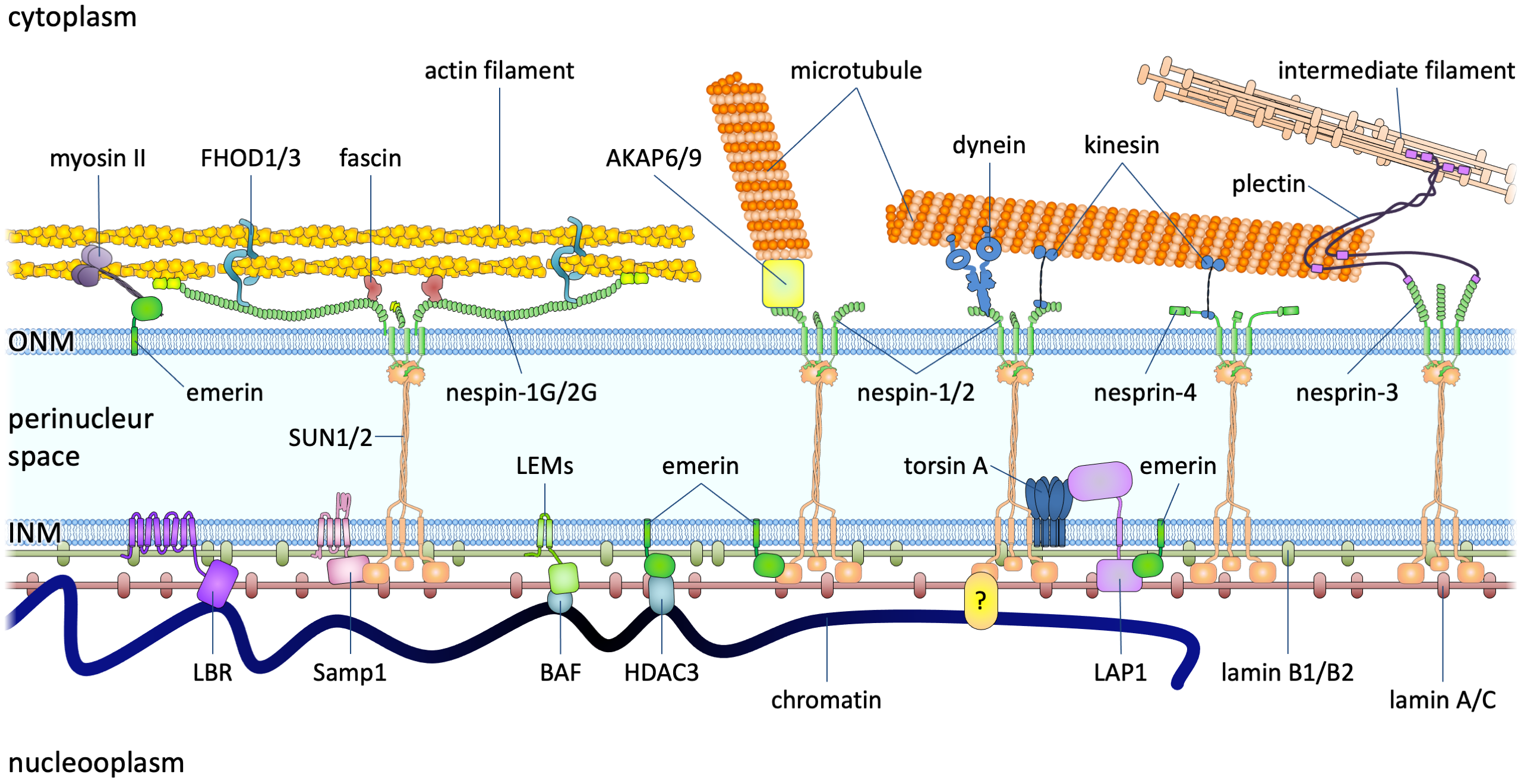 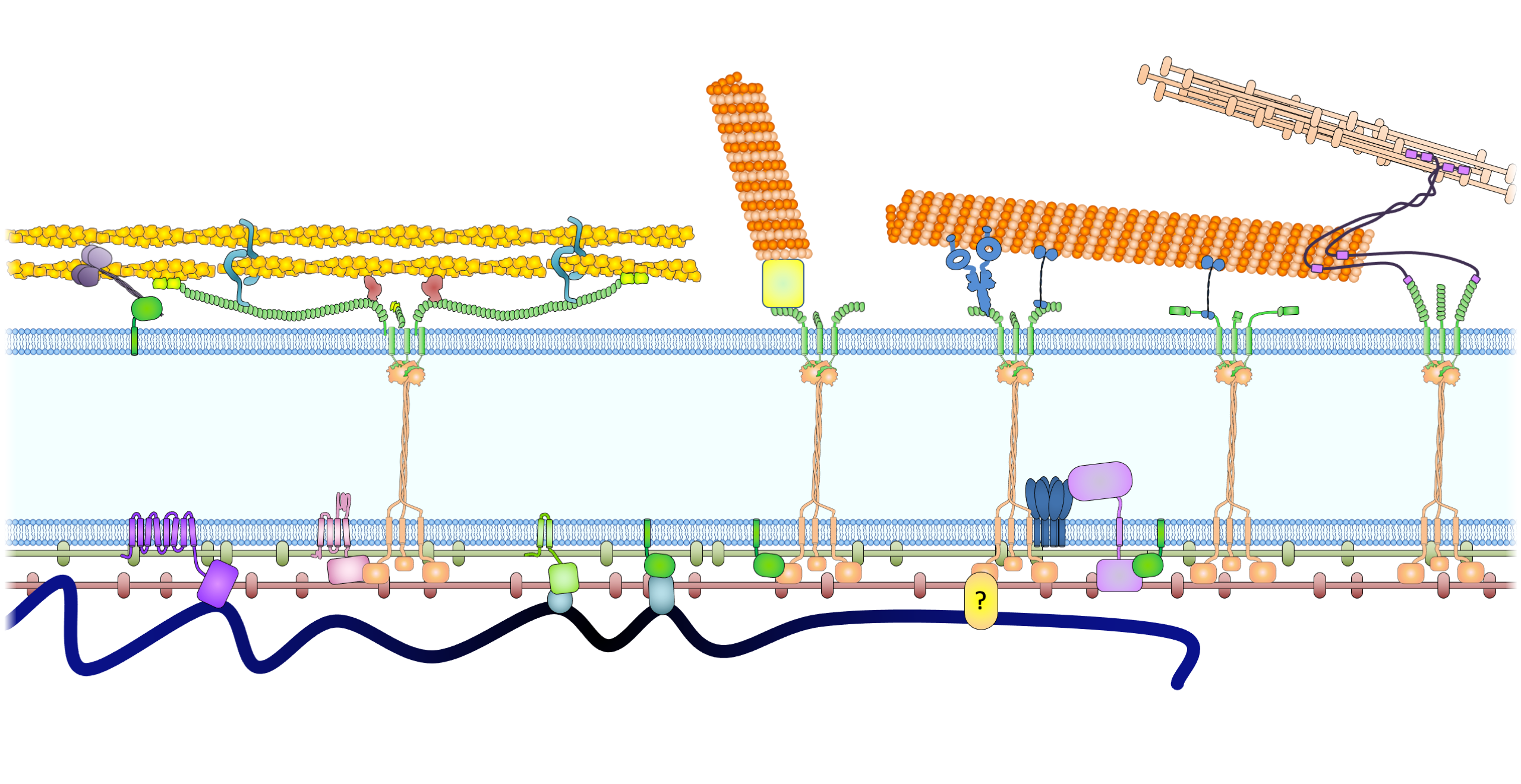 Figure 3. Anchoring the LINC complex. Mammalian SUN proteins are anchored to the inner nuclear membrane through at least three different mechanisms. (A) The nucleoplasmic tail of SUN2 binds to lamin A and anchors the LINC complex to the nuclear lamina in somatic cells. Samp1 and emerin are required to strengthen this anchorage during nuclear movement, presumably to resist the high mechanical force. For clarity, nesprin-2G is shown as a shorter protein without all of its 56 SRs. INM, inner nuclear membrane; ONM, outer nuclear membrane. (B) The nucleoplasmic tail of SUN1 binds TERB1 and anchors the LINC complex to chromosomes through telomere binding proteins (TRF1 and cohesion) in meiotic cells. Lamin C2 also associates with this complex, probably through SUN1 binding. (C) Nucleoplasmic tails of SUN proteins shown binding to nuclear pores (SUN1) and a hypothetical protein as possible alternative anchors for the LINC complex in somatic cells. As described in the text, the localization of SUN1 and SUN2 in the nuclear membrane is only slightly affected in somatic cells lacking all lamins, which indicates the presence of additional anchoring factors. 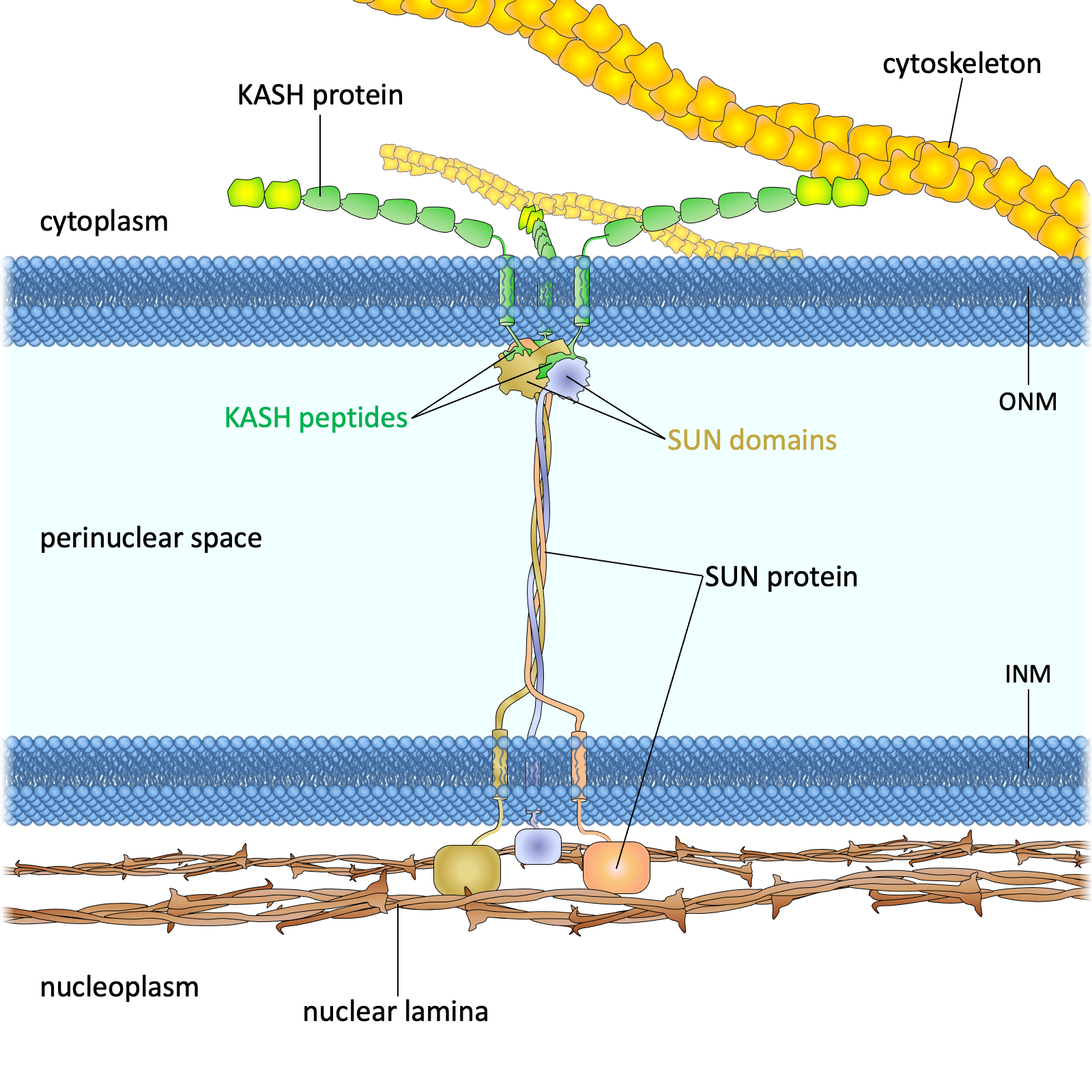 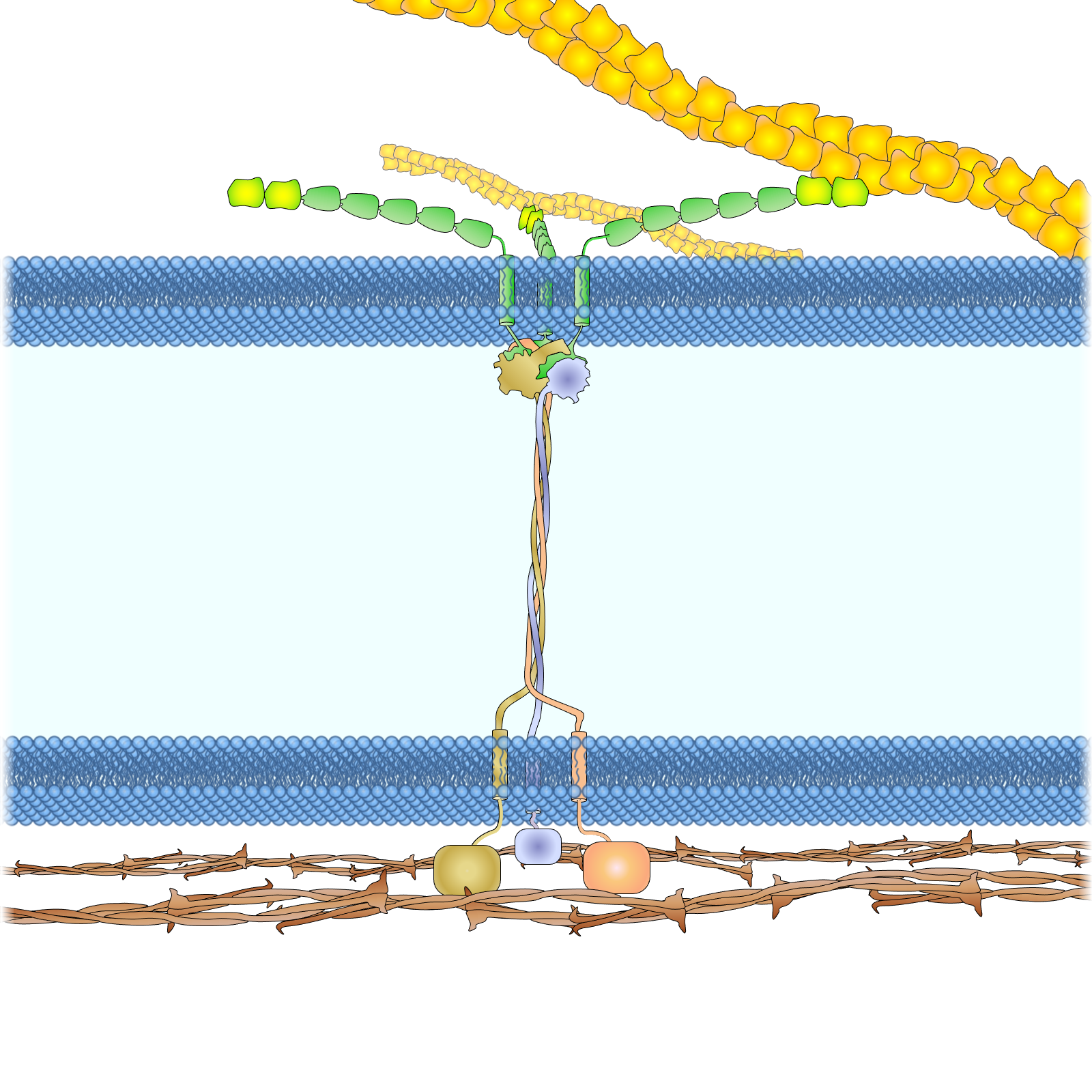 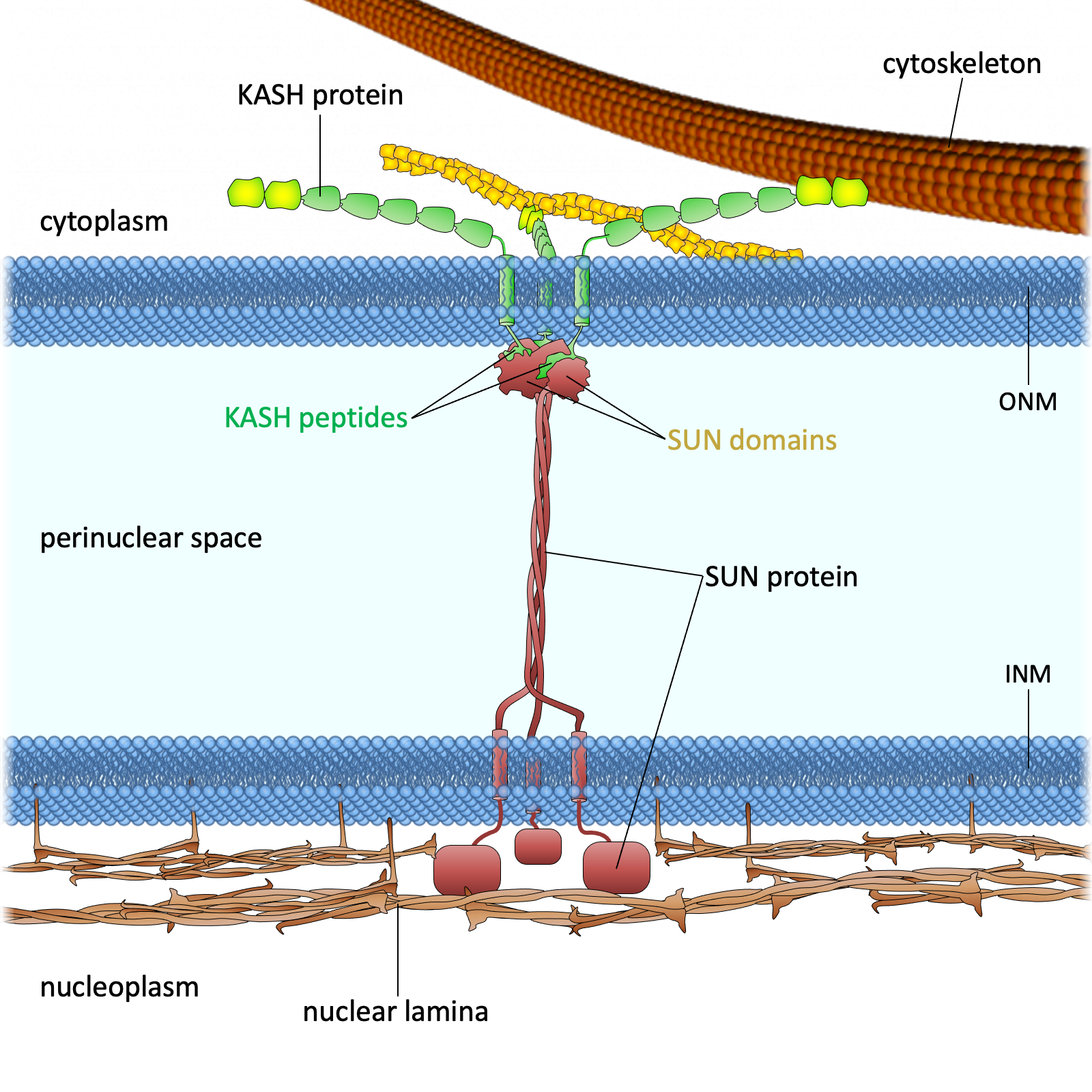 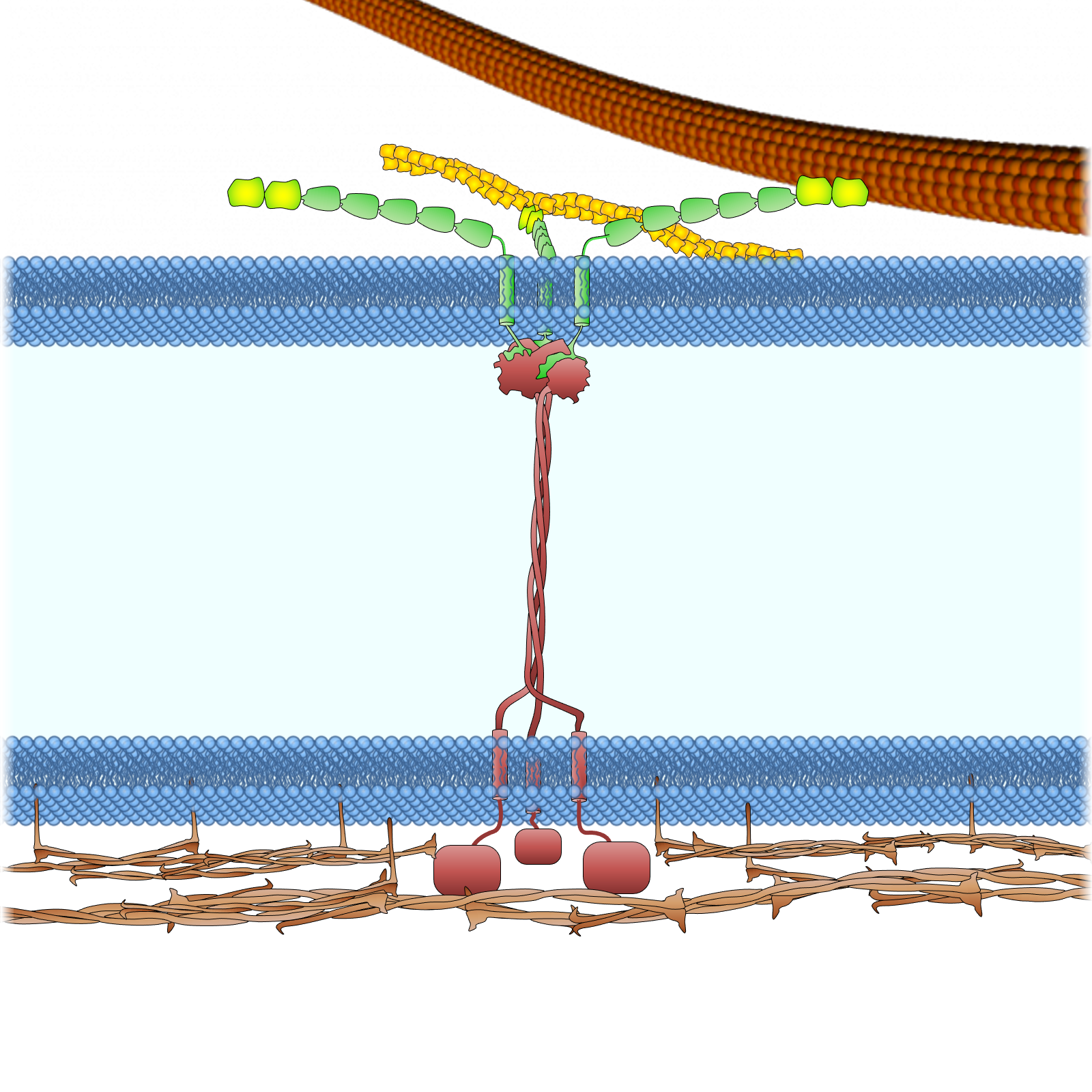 A movie of NIH3T3 fibroblasts expressing GFP-tubulin, time: minute after the addition of lysophosphatidic acid. From Gomes et. al, Cell 2005.

The molecular mechanism of nuclear movement in fibroblasts is well-studied. Binding of lysophosphatidic acid to its receptor activates the small GTPase cdc42, which in turn activates the formation of actin cables at the leading edge. These cables are powered by myosin IIA and steered by myosin IIB to move retrogradely. A linear nuclear structure composed of nesprin2-G and SUN2 (termed TAN line) couples the nucleus to moving actin cables, and the force to carry the nucleus backward.

A movie of NIH3T3 fibroblasts expressing GFP-Progerin and mCherry-LifeAct, time: h:mm after addition of lysophosphatidic acid. Progerin is a mutated nuclear lamina protein. Nuclear lamina with progerin is not strong enough to support nuclear movement. As a result, progerin-containing TAN lines slip over an immobile nucleus. From Chang et. al, PNAS 2019.

It should be noted that nuclear position doesn’t always rely on actin cytoskeleton. In many systems nuclear movement is driven by microtubules and its motors. Rearward nuclear position is also not universal in migrating cells. In migrating leukocytes, the nuclei trend to locate in the front of the cell. It was shown that the nuclear membrane forms protrusions that probe their vicinity to help to determine the path of least resistance. The molecular detail of these nuclear protrusions are still unclear.

The linker of nucleoskeleton and cytoskeleton (LINC) complexes are molecular structures that span the nuclear envelope and connect the nuclear lamina to the cytoskeleton. The LINC complexes are composed of SUN domain proteins on the inner nuclear membrane and nesprin proteins on the outer nuclear membrane. Somatic cells express two SUN proteins, SUN1 and SUN2, that have both overlapping and specific functions. SUN proteins interacts with several nuclear envelope proteins, including emerin and lamins. Their interaction with lamins anchors the LINC complexes. Nesprins are more diverse. Not only because there are four nesprin genes expressed in somatic cells, but also because of these genes express many different isoforms. Nesprins interact with nuclear envelop protein emerin, and there are reports that different nesprins may interact with each other. But the major function of nesprins is to interact with cytoskeletal elements in the cytoplasm. Nesprin-1 and 2 interact with both actin and microtubule cytoskeleton. Nesprin-3 interacts with plectin, which is an adapter protein that can link to all three classes of cytoskeletal filaments. Nesprin-4 binds to the microtubule motor, kinesin. 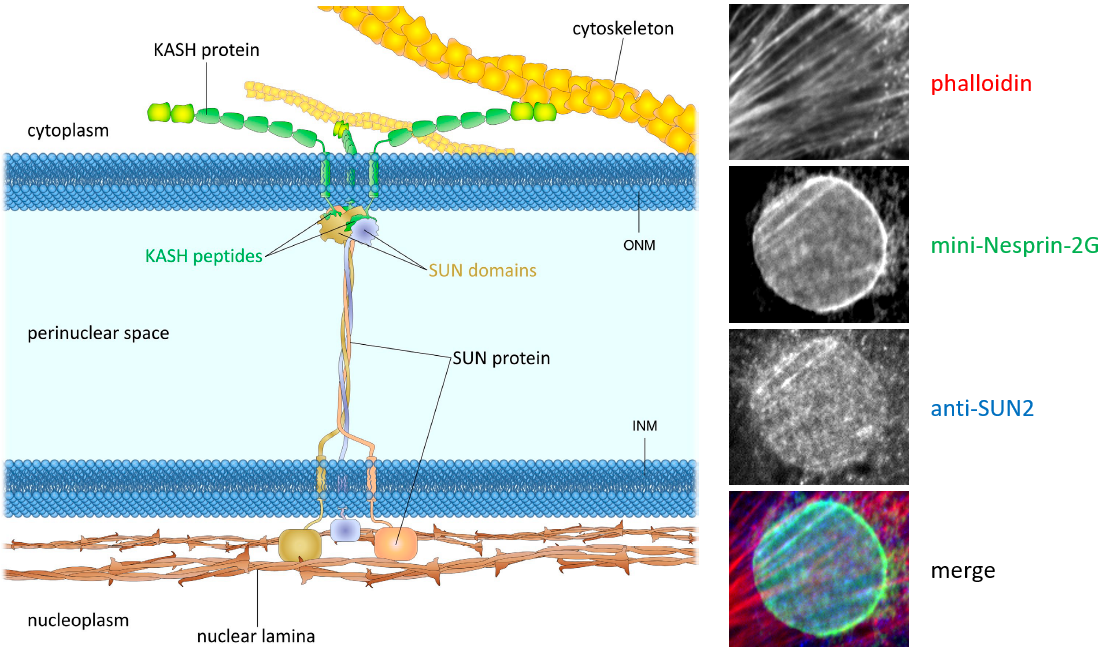 During nuclear movement in fibroblasts, nesprin-2G, the giant isoform of nesprin-2, capture the moving actin cables. Multiple nesprin-2 molecules thus align along actin cables and form a linear structure underneath the cable. This structure, termed transmembrane actin-associated nuclear (TAN) line, transfers force from the moving actin cables to move the nucleus. Interestingly, only SUN2, but not SUN1, is found in this structure, indicating that either interaction between actin and nesprin-2 affects nesprin-2’s binding to the SUN proteins, or SUN-nesprin binding regulates nesprin’s interaction with the cytoskeleton.

TAN lines contains other proteins like emerin, Samp1 and FHOD1. One other protein, lamin A/C, is not enriched in TAN lines but is required for the anchorage of TAN lines. In the absence of lamin A/C, TAN lines form but slip over the nucleus without moving it. Below is a movie of a cell expressing GFP-progerin, a mutant form of lamin A. In this case the lamina is weaken and cannot resist the force from actin cables (red, mCherry-LifeAct), GFP-progerin was torn apart from the lamina, became enriched on TAN line and moved along with it.

Serum-starved fibroblasts lose most of their filamentous actin structures. Upon stimulation of serum (or serum factor lysophosphatidic acid), rho and cdc42 GTPases are activated. Rho activation leads to the formation of stress fibers, while cdc42 activation leads to the establishment of cell polarity. Cdc42 activates myotonic dystrophy kinase-related cdc42-binding kinase (MRCK) to phosphorylate the regulatory light chain of myosin II, allowing the formation of actin cables at the cell cortex.

In cells at the wound edge of a monolayer, these cables are formed mostly at the leading edge, i.e. the wound edge. These cables are highly dynamic. They form constantly and are driven by mysoin II to move retrogradely. Two myosins II are essential – myosin IIA is the engine and drive the movement, and myosin IIB is the steering wheel that controls the direction. In the absences of myosin IIA no actin cables can form or move; whereas in the absences of myosin IIB the actin cable flow is chaotic and move in random directions. Below is a movie of a lysophosphatidic acid-activated cells, red is an actin probe mCherry-LifeAct and green is the nucleus.