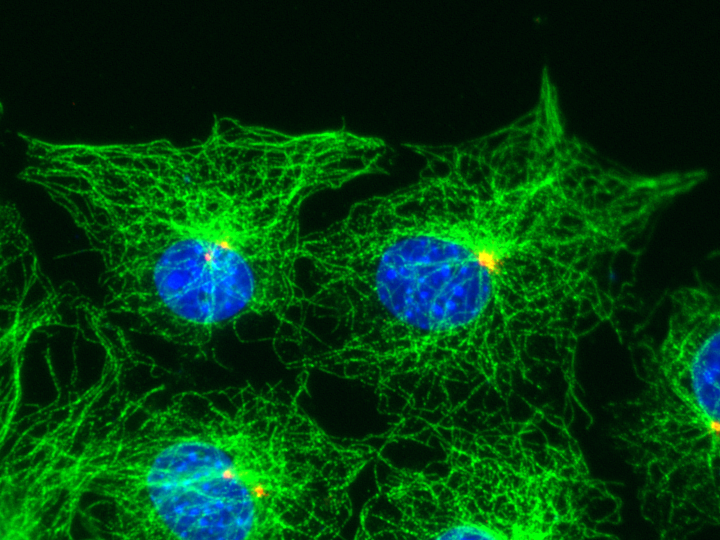 The nucleus-centrosome axis determines the polarity in migratory cell and nuclear movement is one of the earliest symmetry-breaking processes essential for cell polarization and cell migration. Upon stimulation, cdc42 is activated and subsequently activates actin and myosin to actively move the nucleus rearward and microtubule and dynein to maintain the centrosome at the cell center.

We are interested in elucidating pathways of cell polarization at the molecular level, with an focus on the roles of cytoskeletal and nuclear envelope proteins.

Effects of aging on cell polarization

Cell polarization during cell migration is affected by aging. We found that this is in part caused by cell secretion – cultured dermal fibroblasts from aged people secrete protein factors that are sufficient to inhibit cell polarization in young cells. Similar inhibitory factors are also present in serum from aged people. We have identified several of these aging factors and are working to understanding their modes of action.

Contribution of polarization defects to aging

Cell polarity is a fundamental phenomenon which is essential for various aspects of cell behavior. Defects in cell polarity has been suggested to contribute to aging, as shown in skin wound healing in stem cell renewal. Mutations of lamin proteins and alternations in prelamin A processing cause premature aging phenotype. SUN1 expression is increased by aging and this increase is both necessary and sufficient to cause polarity defect. These results highlight the effects of the nucleus and cell polarity in aging.